Call for Papers: The Russian Orthodox Church After the Post-Soviet Transition 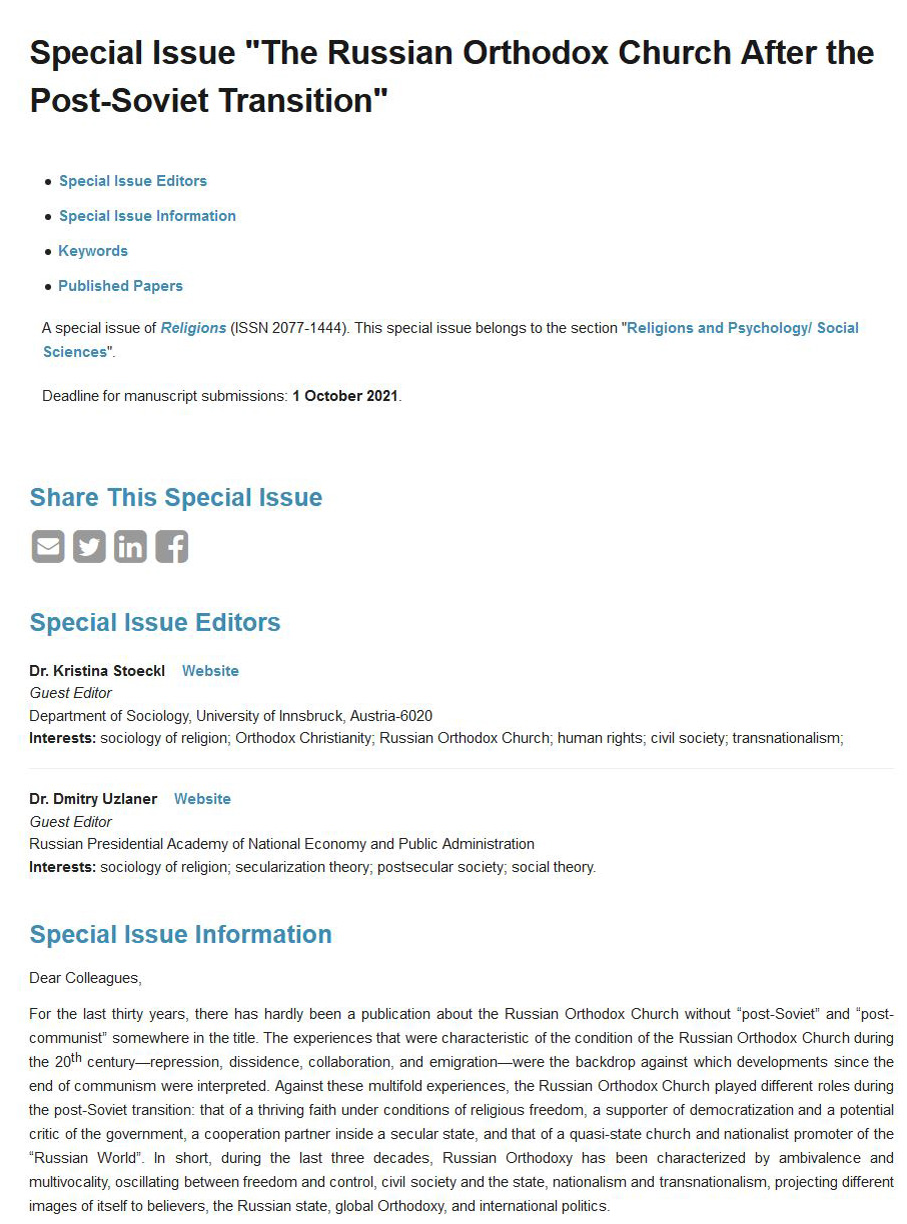 Special Issue Information
Dear Colleagues,
For the last thirty years, there has hardly been a publication about the Russian Orthodox Church without “post-Soviet” and “post-communist” somewhere in the title. The experiences that were characteristic of the condition of the Russian Orthodox Church during the 20th century—repression, dissidence, collaboration, and emigration—were the backdrop against which developments since the end of communism were interpreted. Against these multifold experiences, the Russian Orthodox Church played different roles during the post-Soviet transition: that of a thriving faith under conditions of religious freedom, a supporter of democratization and a potential critic of the government, a cooperation partner inside a secular state, and that of a quasi-state church and nationalist promoter of the “Russian World”. In short, during the last three decades, Russian Orthodoxy has been characterized by ambivalence and multivocality, oscillating between freedom and control, civil society and the state, nationalism and transnationalism, projecting different images of itself to believers, the Russian state, global Orthodoxy, and international politics.

More recently, however, and especially by way of the constitutional amendment of the Russian Federation in 2020, the place of the Church inside the Russian state appears to have consolidated in the form of close church–state cooperation and a power-confirming and nationalist agenda of traditional values. At the same time, the support of the Church on the level of society and popular culture has been waning, with some cases of spectacular protests against the Church. The existence of a pro-Orthodox consensus among Russians seems increasingly uncertain.

This Special Issue invites analyses of current events that add new material and original data to the field, and welcomes contributions that explore the multiple and contradictory roles of the Russian Orthodox Church inside Russian society and politics in the last thirty years. Scholars are encouraged to engage with the idea that the period of post-Soviet transition for the Russian Orthodox Church is indeed “over”, and to push the boundaries of the analysis of Russian Orthodoxy beyond the categories of post-Soviet revival or desecularization.

This open-access Special Issue is co-sponsored by the European Research Council (ERC) under the European Union’s Horizon 2020 research and innovation programme (POSEC, grant agreement no. ERC-STG-2015-676804).