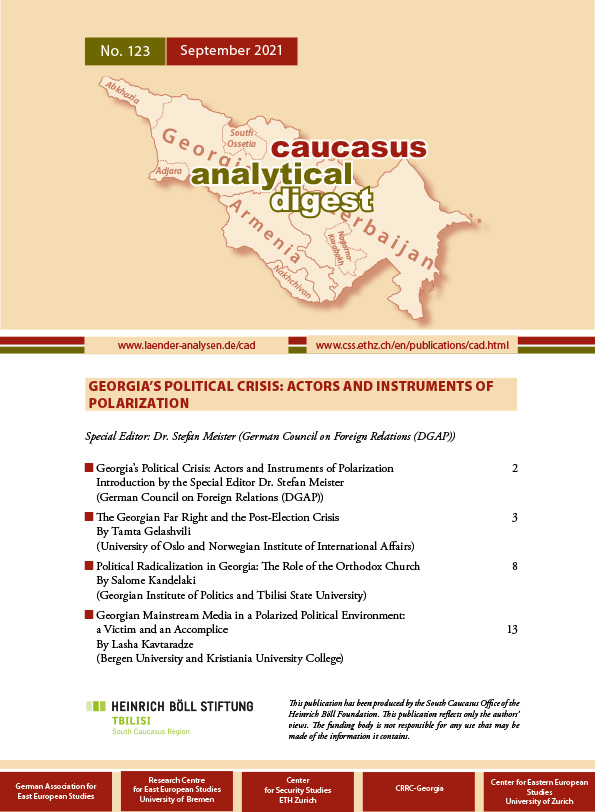 Actors and Instruments of Polarization

Polarization is a key characteristic of Georgian politics. Following the parliamentary election in October 2020, Georgia entered a deep political crisis; a blockade between the ruling Georgia Dream (GD) party and the opposition parties under the leadership of the United National Movement (UNM). This election marked a new height in the political polarization of the country. The political tensions before, during and after the election have been linked to a political culture characterized by a lack of compromise, a winner-take-all approach and a highly personalized political system without strong institutions. Both main parties, GD and the UNM, have a vested interest in this polarization because it helps to mobilize their electorate and offers no space to competitors. An agreement mediated by the EU and the US in the spring of 2021 did not end this conflict; on the contrary, both parties have become the targets of increasing criticism by political actors in Georgia.

The violent events around Tbilisi Pride on 05 July 2021 simply mark the next stage in an increasing radicalization and polarization of Georgian politics and society. Key actors and instruments of this polarization are right wing groups, media and the Georgian Orthodox Church. This edition of the Caucasus Analytical Digest focuses on these three key actors, which continue to fuel polarization in Georgian politics and society. All three are instruments of and actors in polarization; they mutually influence and boost each other. They are not exclusive instruments of the political elites but also interact, as actors, with each other, the ruling party and the main opposition forces. In the particular context of Tbilisi Pride, we can observe an interaction between the Georgian Orthodox Church, right wing groups and right-wing media. However, once again, political elites and the government showed no interest in diminishing the violence, but rather used it for the mobilization and radicalization of their supporters. As a result, polarization remains a key element in Georgian politics and will continue to undermine the democratization as well as political and social modernization of the country.

Political Radicalization in Georgia: The Role of the Orthodox Church
By Salome Kandelaki (Georgian Institute of Politics and Tbilisi State University)

Georgian Mainstream Media in a Polarized Political Environment: a Victim and an Accomplice By Lasha Kavtaradze (Bergen University and Kristiania University College)