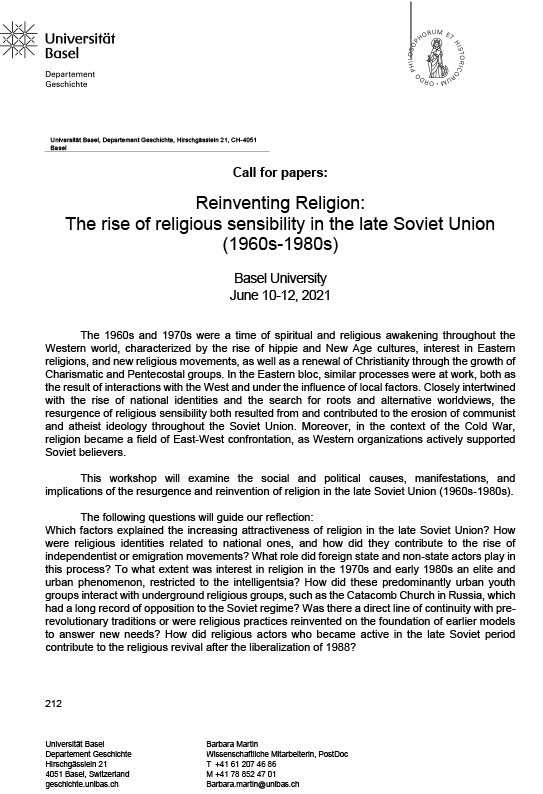 Reinventing Religion:
The rise of religious sensibility in the late Soviet Union (1960s-1980s)

The 1960s and 1970s were a time of spiritual and religious awakening throughout the Western world, characterized by the rise of hippie and New Age cultures, interest in Eastern religions, and new religious movements, as well as a renewal of Christianity through the growth of Charismatic and Pentecostal groups. In the Eastern bloc, similar processes were at work, both as the result of interactions with the West and under the influence of local factors. Closely intertwined with the rise of national identities and the search for roots and alternative worldviews, the resurgence of religious sensibility both resulted from and contributed to the erosion of communist  and atheist ideology throughout the Soviet Union. Moreover, in the context of the Cold War, religion became a field of East-West confrontation, as Western organizations actively supported Soviet believers.

This workshop will examine the social and political causes, manifestations, and implications of the resurgence and reinvention of religion in the late Soviet Union (1960s-1980s).

The following questions will guide our reflection:
Which factors explained the increasing attractiveness of religion in the late Soviet Union? How were religious identities related to national ones, and how did they contribute to the rise of independentist or emigration movements? What role did foreign state and non-state actors play in this process? To what extent was interest in religion in the 1970s and early 1980s an elite and urban phenomenon, restricted to the intelligentsia? How did these predominantly urban youth groups interact with underground religious groups, such as the Catacomb Church in Russia, which had a long record of opposition to the Soviet regime? Was there a direct line of continuity with prerevolutionary traditions or were religious practices reinvented on the foundation of earlier models to answer new needs? How did religious actors who became active in the late Soviet period contribute to the religious revival after the liberalization of 1988?

We welcome paper proposals in the fields of history, sociology, anthropology, political science, religious studies, literature, and adjacent fields, with a focus on one or several Soviet republics.
Suggested axes of research include (but are not limited to):

To apply, please send a 250-word abstract of your paper, along with a 100-word personal biographical statement. Papers and abstracts may be submitted in either English or Russian. The working language of the workshop will be English, but papers may be presented in Russian. The publication of a selection of papers in a collected volume or special journal issue is planned.
Limited funding is available for international participants without institutional support.

The deadline for applications is November 30, 2020.
Notification of acceptance will be sent by December 31, 2020.
Pre-circulated papers are expected one month ahead of the workshop.
Should the epidemic situation or the closure of borders warrant it, the workshop may be partially or fully conducted online.