Workshop: The Kyiv Church Metropolia searching for its identity in the 16th – 18th centuries 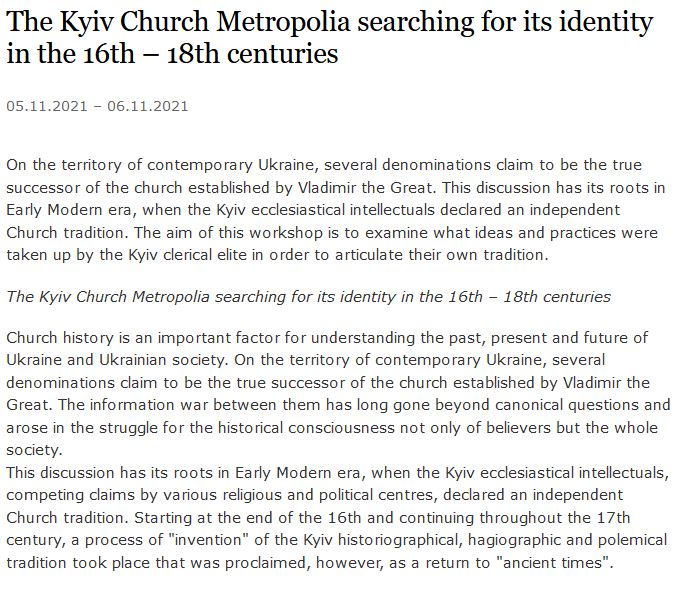 The aim of this workshop is to examine what ideas and practices were taken up by the Kyiv clerical elite in order to articulate their own tradition and what ideas were refuted or simply ignored in the political declarations and polemical, historiographical and hagiographic writings.

The parallel "invention of tradition" in the United and Orthodox Churches provides important material for comparing this process in both parts of the once-unified Kyiv Metropolia.

10.15-11.45 - Kyiv church Metropolia in between of ecclesiastical and political centres
Chair Olga Trufanova

Olenka Pevny (Cambridge Ukrainian Studies, University of Cambridge), ‘To have at home, what you seek elsewhere’: Visualising Universal Union and a Patriarchate in 1640’s Kyiv

Vera Tchentsova (Institute for South-East European Studies of the Romanian Academy, Bucharest), Parthenios IV’s Concession of the Kyivan Metropolitan’s Ordination: The Date of the Act Plus Some of the Hetman’s Secrets

Larysa Dovga (Kyiv Mohyla Academy), Random choice vs. search for roots: a repertoire of translations published in the printing houses of the Kyiv Orthodox Metropolia at the end of the 16th and first half of the 17th centuries.

Ivan Almes (Ukrainian Catholic University), “Basilian Unification”: Liturgical Books and Reading Practices of the Eastern-Catholic Monks in the Lviv Eparchy (second half of the 18th Century)

Kyrill Kobsar (Christian-Albrecht University of Kiel), A Monastic Confraternity of Prayer in the Orthodox Metropolia of Kyiv? On the Commemoration Treaty between the St. Nicholas Monastery in Kyiv and the St. Trinity Monastery in Slutsk of the Year 1517

Oksana Prokopiuk (Kyiv Pechersk National Museum), Identity of the Kyiv spiritual elite of the second half of the 18th century in the light of the donations of Archimandrite of the Kyiv-Pechersk Lavra Zosima (Valkevych)

Alina Kondratiuk (Kyiv Pechersk National Museum), Reflection of the topical theological problems in the murals of the Lavra school of the first half of the 18th century

Nazar Kozak (National Academy of Science of Ukraine), The Akathistos cycles and Identity (re-)Formation in the Kyiv Church Metropolia around 1600 CE

Patryk Michał Ryczkowski (Leopold-Franzens-Universität Innsbruck), Before the Metropolia: The Epic Narrative of Jozafat Kuncewicz and the Transition to the Uniate Church in Poland-Lithuania

13.00-15.00 - Historical narratives in the process of the formation of Kyiv ecclesiastical identity
Chair Andrei Vinogradov

Oleksii Rudenko (Central European University), The Roxolanian Tradition and its Transfer in the Early Modern Era

Yaroslav Zatyliuk (National Academy of Science of Ukraine), Historical Narratives after the Two ‘Revivals’ of the Kyivan Metropolitanate: from Iov Borec’ky to Peter Mohyla