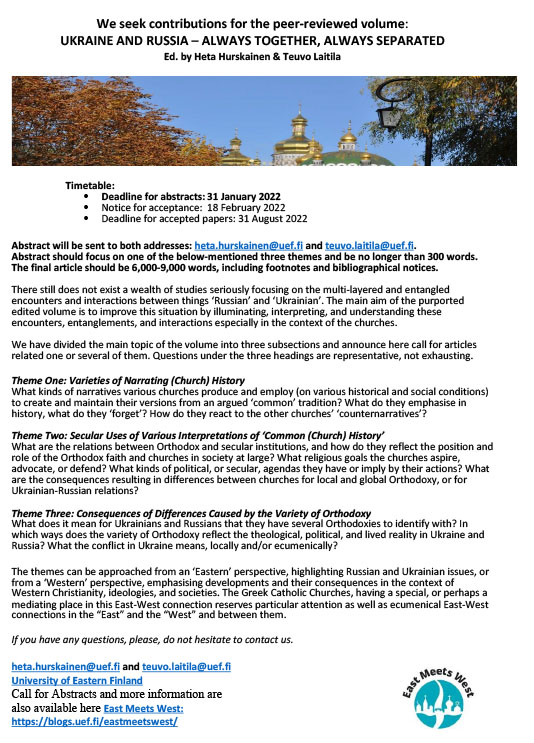 We seek contributors for the peer-reviewed volume:

encounters and interactions between things ‘Russian’ and ‘Ukrainian’. The main aim of the purported edited volume is to improve this situation by illuminating, interpreting, and understanding these encounters, entanglements, and interactions especially in the context of the churches. We have divided the main topic of the volume into three subsections and announce here call for articles related one or several of them. Questions under the three headings are representative, not exhausting.

Theme One: Varieties of Narrating (Church) History
What kinds of narratives various churches produce and employ (on various historical and social conditions) to create and maintain their versions from an argued ‘common’ tradition? What do they emphasise in history, what do they ‘forget’? How do they react to the other churches’ ‘counternarratives’?

Theme Two: Secular Uses of Various Interpretations of ‘Common (Church) History’
What are the relations between Orthodox and secular institutions, and how do they reflect the position and role of the Orthodox faith and churches in society at large? What religious goals the churches aspire, advocate, or defend? What kinds of political, or secular, agendas they have or imply by their actions? What are the consequences resulting in differences between churches for local and global Orthodoxy, or for Ukrainian-Russian relations?

Theme Three: Consequences of Differences Caused by the Variety of Orthodoxy
What does it mean for Ukrainians and Russians that they have several Orthodoxies to identify with? In which ways does the variety of Orthodoxy reflect the theological, political, and lived reality in Ukraine and Russia? What the conflict in Ukraine means, locally and/or ecumenically?

The themes can be approached from an ‘Eastern’ perspective, highlighting Russian and Ukrainian issues, or from a ‘Western’ perspective, emphasising developments and their consequences in the context of Western Christianity, ideologies, and societies. The Greek Catholic Churches, having a special, or perhaps a mediating place in this East-West connection reserves particular attention as well as ecumenical East-West connections in the “East” and the “West” and between them.

Abstract will be sent to both addresses: and .
Abstract should focus on one of the below-mentioned three themes and be no longer than 300 words.
The final article should be 6,000-9,000 words, including footnotes and bibliographical notices.