Call for Contributions: The Churches in Southeastern Europe and the „Jewish Question“ during the first Half of the 20th Century 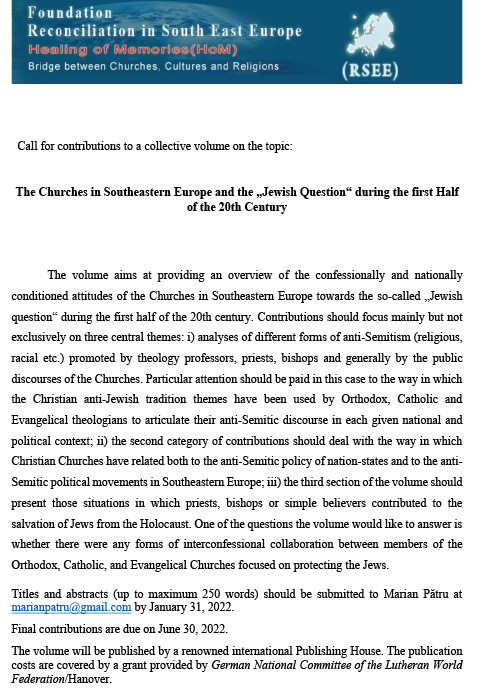 Call for contributions to a collective volume on the topic:

The Churches in Southeastern Europe and the „Jewish Question“ during the first Half of the 20th Century
Marian Pătru (Hg.)

The volume aims at providing an overview of the confessionally and nationally conditioned attitudes of the Churches in Southeastern Europe towards the so-called „Jewish question“ during the first half of the 20th century. Contributions should focus mainly but not exclusively on three central themes: i) analyses of different forms of anti-Semitism (religious, racial etc.) promoted by theology professors, priests, bishops and generally by the public discourses of the Churches. Particular attention should be paid in this case to the way in which the Christian anti-Jewish tradition themes have been used by Orthodox, Catholic and Evangelical theologians to articulate their anti-Semitic discourse in each given national and political context; ii) the second category of contributions should deal with the way in which Christian Churches have related both to the anti-Semitic policy of nation-states and to the anti-Semitic political movements in Southeastern Europe; iii) the third section of the volume should present those situations in which priests, bishops or simple believers contributed to the salvation of Jews from the Holocaust. One of the questions the volume would like to answer is whether there were any forms of interconfessional collaboration between members of the Orthodox, Catholic, and Evangelical Churches focused on protecting the Jews.

The volume will be published by a renowned international Publishing House. The publication costs are covered by a grant provided by German National Committee of the Lutheran World Federation/Hanover.