Call for Papers: “Stolen Churches” or “Bridges to Orthodoxy”? 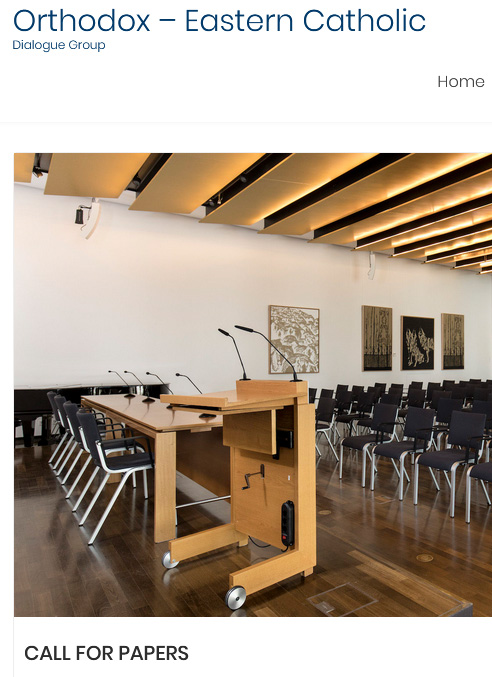 “Stolen Churches” or “Bridges to Orthodoxy”?
Impulses for Theological Dialogue Between Orthodox and Eastern Catholic Churches

In many respects, the history of Christianity is as much a history of division as it is of unity. In the past two millennia all too many Christian churches and traditions moved away from one another and went their own individual paths. We are living in exciting times in which these paths are beginning to intersect once again in multiple ways. Through recent developments in ecumenical dialogue, separated Christian churches have begun to appreciate anew that what they share in common is, or at least should be, far more important than what divides them. While ecumenical dialogue has not resulted in full visible ecclesial unity (and more recent debates have questioned whether this is even necessary or desirable, and have spoken instead of closer union and partial communion as alternatives ends for ecumenism to pursue), what has emerged is a new climate of improved relations between churches which once were sworn enemies.

Beside the important gains made through multilateral dialogues between multiple churches, which have made much progress due to ecumenical organizations such as the World Council of Churches (WCC), churches have also gained a great deal through bilateral dialogues. This can prove especially fruitful in healing wounds of the past. Today, there is almost every possible combination of bilateral dialogue that might be imagined.

And yet, one of the rare yet vital exceptions is dialogue between the Orthodox and Eastern Catholic Churches. These Churches have endured a very complex and at times tense relationship with one another (not simply theological but also political and ethnic).

In many cases these tense relationships remain still to this day. Indeed, they have even in some cases increased in difficulty in various contexts (e.g. in the Ukrainian context). One of the key stumbling blocks between these churches concerns the widely differing perceptions of what these Eastern Catholic Churches represent and their disparate views. Regardless of historical accuracy, many Orthodox Christians refer to these churches as “stolen” (despite the fact that most of these churches did not even emerge from so-called processes of ‘uniatism’ nor ‘proselytism’), while on the Catholic side they are seen as bridges to the Orthodox traditions (a perspective which, again, many Orthodox strongly reject).

Acknowledging this situation, we decided to name our conference “Stolen Churches” or “Bridges to Orthodoxy”? Impulses for Theological Dialogue Between Orthodox and Eastern Catholic Churches.

We are aware that this title theme may strike some as somewhat provocative but it serves to illustrate the differing and polarized positions on both sides with regard to the ecclesial status of Eastern Catholic Churches. We hope that this conference will help draw out the subjectivity of differing ecclesiological standpoints with regard to the status of these churches and therefore help move toward an ecumenically-oriented breakthrough in understanding. It is our intention to provide the opportunity for theological impulses to emerge that we hope would result in advancing bilateral dialogue between these two traditions (while acknowledging of course that, de facto, the Eastern Catholic Churches are part of the Roman Catholic Church).

The intention behind this conference, therefore, is to encourage and promote much needed theological engagement for the furtherance of dialogue between Orthodox and Eastern Catholic Churches. We seek to gather together official representatives of both these Christian traditions, as well as scholars (especially theologians and historians) and political representatives from the differing contexts where the tensions are greatest to see if we can help move dialogue and relations forward in this area. Delving deeper into what shapes and maintains differing ecclesiological perspectives, partners in dialogue might come to appreciate the sources of divisions and the sensitivities involved in helping to overcome ecclesial stand-offs of key historical moments as well as in recent decades.

We would, of course, welcome further suggestions on additional themes, topics and relevant questions.

The proceedings of the conference (that, of course, meet the required editorial and scholarly requirements) will be published with Palgrave Macmillan in the “Pathways for Ecumenical and Interreligious Dialogue” series (which has published 16 important volumes since its inception in 2015 – including recent volumes exploring Pope Francis and Interreligious Dialogue, Vatican II’s Impact on Ecumenism and the Church’s engagement with the wider world, and Vatican II and Catholicism Engaging other Faiths and the Ecumenical Legacy of the Cappadocian Fathers).