The Ukrainian voice in the World Council of Churches 11th Assembly in Karlsruhe, Germany 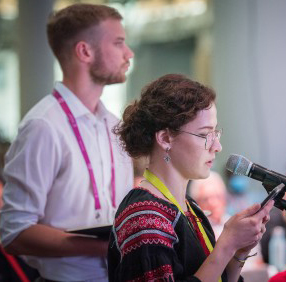 by Heleen Zorgdrager, professor of Systematic Theology at Protestant Theological University, Amsterdam and visiting professor to the Institute of Ecumenical Studies, Lviv

Young Orthodox Oleksandra Kovalenko and Roman Sigov suddenly became the face and voice of Ukrainian Christianity at the 11th Assembly of the World Council of Churches in Karlsruhe. They were part of the Ukrainian delegation that came to the Assembly on special invitation of the WCC leadership. Officially, the delegation of twelve persons had the status of ‘observers,’ since Ukrainian churches are not yet a member of the WCC. For all representatives it was an opportunity to communicate about how the war affects the country, and how churches are responding with spiritual and humanitarian assistance to the people in need. Also, they actively used the Assembly for building relations within the international fellowship. Among the twelve, Oleksandra and Roman (Orthodox Church of Ukraine) stood out for being quite visible throughout the Assembly, including the business plenaries where urgent statements on public issues, also on the war in Ukraine, were discussed. They stood firmly, intervened with strong voices and had a meaningful participation. At the end of the Assembly I had the chance to take an interview with both.

Oleksandra and Roman, what stood out for you in the assembly, what was a highlight?

Oleksandra: I start every conversation with saying that we are very grateful that we are here. We appreciate it that the leadership of the WCC dedicated the Europe plenary for a large part to Ukraine. We really appreciate the efforts they made and how they gave us the opportunity to witness.

Roman: What stood out for me was, obviously, the thematic plenary on Europe in which I took part. I am really happy and it was important that Ukrainians as well as other European youth were speaking and not Russians as it happens sometimes. So I guess this was rather a good step forward. The fact that Archbishop Yevstratii (Zoria) of the Orthodox Church of Ukraine as well as the other church expressed our willingness to join the World Council of Churches is a positive sign which makes me quite optimistic.

Oleksandra: I can mention some highlights. When I came to Karlsruhe for the Youth Pre-Assembly, the first night it was raining. I went to the church for a Taizé-prayer and when I entered the church building I was completely wet. The church was lit in blue and yellow colors. Roman was asked to do the Bible reading in Ukrainian. Praying together in that church was such a deep experience. Also, I met here many nice people, made new friends and we will for sure keep in touch. It was so good to meet people whom you feel are really supportive to Ukraine in this time of war. There were disappointments as well. People have asked me questions that demonstrate misinformation, indifference or even arrogance. You hear them using phrases from Russian propaganda. To give an example of a painful question: someone asked me “How was it possible that the Russian army was within three hours near to Kyiv, don’t you have borders? Are they like paperboard?” Then you feel that people cannot understand what it is like when war comes over you, and tanks crush the borders of your country. In such moments I feel lonely.