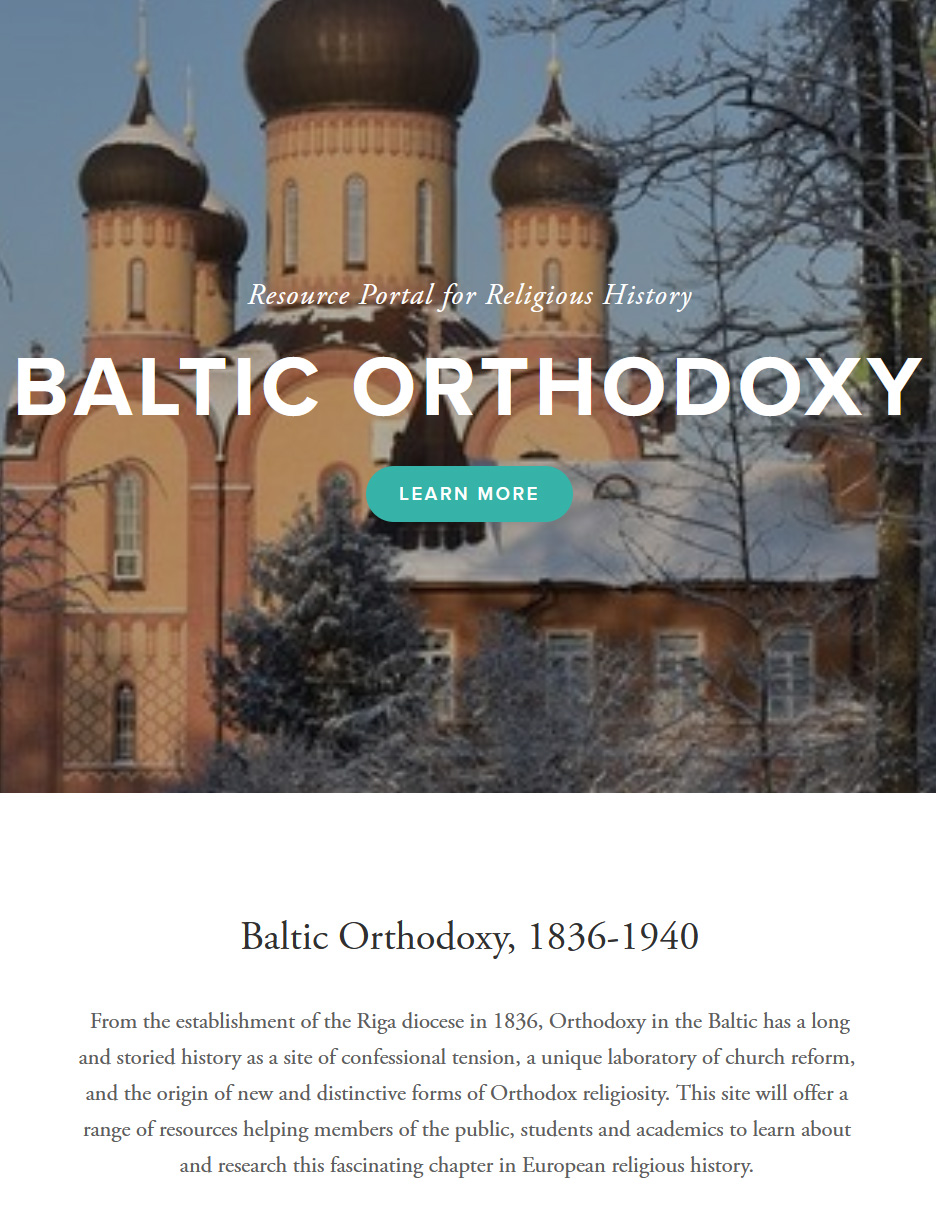 Funded by the University of Tartu, this project aims to provide accessible and informative resources to members of the general public, students, and academics about Orthodoxy in the Baltic. Ranging from the creation of the Riga diocese in 1836 to the German invasion in 1940, the resources offered on this website include a time line, biographies, maps, photographs, archival documents, and links to further reading. This will make the website one of the leading resources on a fascinating but understudied chapter in European religious history.

Baltic Orthodoxy, 1836-1940
From 1836 to 1940, Russian Orthodoxy in the Baltic (defined here as the imperial provinces of Estland, Livland, and Kurland/the interwar republics of Estonia and Latvia) underwent dramatic changes and shifts in fortune.

At the beginning of this period, Orthodoxy was the religion of a limited number of bureaucrats, soldiers, and merchants: the most numerous Orthodox group in the region, the Old Believers, rejected the authority of the Russian Orthodox Church.

However, in the 1840s, approximately 110,000 Latvians and Estonians converted to Orthodoxy, largely in an effort to gain the support of the Russian state in their tempestuous relationship with the German landowning elite. This set the stage for simmering confessional tensions with Lutheranism, whose dominance in the region had been largely unchallenged to this point.

Equally, it set in motion a process of Orthodox institutionalisation in the Baltic, as the Church (aided and abetted by the imperial government) sought to create religious infrastructure from scratch. However, institution building was only one part of the story: particularly in the 1880s and 1890s, the Church established new sacred stories for Baltic Orthodoxy by propagating saints’ cults, miracle-working icons, and pilgrimage.

The tumultuous period between the first Russian Revolution in 1905 and the collapse of Russian control over the the region in 1917-18 saw Baltic Orthodoxy emerge as a laboratory for church reform. Drawing both on a wider discourse of reform and on novel forms of religiosity unique to the area, Orthodox churchmen (Latvian-, Estonian-, and Russian-speaking) made a distinctive contribution to ecclesiastical renovation while at the same time facing the violence and deprivation unleashed by war and revolution.

Following the establishment of the independent republics of Latvia and Estonia, the Orthodox minorities confronted a range of new questions: how should they relate to the new states and their laws regarding religion? What was their relationship with the Moscow patriarchate and other autocephalous Orthodox churches, particularly the patriarchate of Constantinople? And how would they remain united in the face of ethnic diversity? Many of these questions remained unresolved by the time the republics were occupied by Soviet troops.